The following is an interview from when Barbara was a student in the Arizona School of Podiatric Medicine at Midwestern University.

After all, Barbara is studying to become a podiatrist in part because of her own experiences working at a running shoe store.

Barbara had switched to pre-med from broadcast journalism while in college at the University of Southern California, but after receiving her bachelor's degree in biology, she became overwhelmed by what lay before her in her nascent medical career and was questioning whether she wanted to keep going.

"As soon as I decided I was interested in something scientific, it seemed like my only option was, 'I'll be a doctor,'" she remembers. "I got involved in many medical clubs, took the MCAT, and so forth, but by the time I was ready to apply, I was having second thoughts."

Barbara decided to take a year off and returned to her Sacramento, California home. She got a job at a running shoe store and, as part of her training, took a two-month course on foot biomechanics, gait analysis, and other running-specific assessments. When a podiatrist stopped by the store every month to do screenings and consultations for her customers, Barbara saw where her future might lie.

"It was the first time I had ever been exposed to a podiatrist," explains Barbara. "That was when my gears started turning. I thought, 'I really like running, and here are all of these people with foot problems who have a similar interest in running.'"

Armed with her completed medical prerequisites from USC, Barbara came to a decision - she wanted to study podiatry and focus on sports.

“ I really like running, and here are all of these people with foot problems who have a similar interest in running. ”

A Community of Learning

The decision to attend Midwestern University was an easy one - even though it was her first interview, she fell in love with the school and the area and cancelled the rest of her appointments.

Barbara is one of 26 podiatry students in her class, which she says makes it feel like a large family instead of a collection of faculty and classmates. She enjoys how Midwestern's interdisciplinary approach allows the podiatry students to study basic sciences with osteopathic medical students - she believes that comparing notes with students from other disciplines strengthens her foundational skills.

Midwestern's interactive approach is also a plus for Barbara. She and her fellow students help their professors with research and often accompany them to their private practices and to service opportunities. "I think that people here are active and want to be involved," she observes. "They want to interact with others. It's a social, fun campus."

Her monthly trips with Dr. Jenkins to Runner's Den, however, may be her favorite podiatry-related activity. They are a constant reminder of the moment she decided what she wanted to do with her career. "I love going and doing that with him because I feel right at home. I know all of the shoes, and I just feel comfortable in a shoe store." 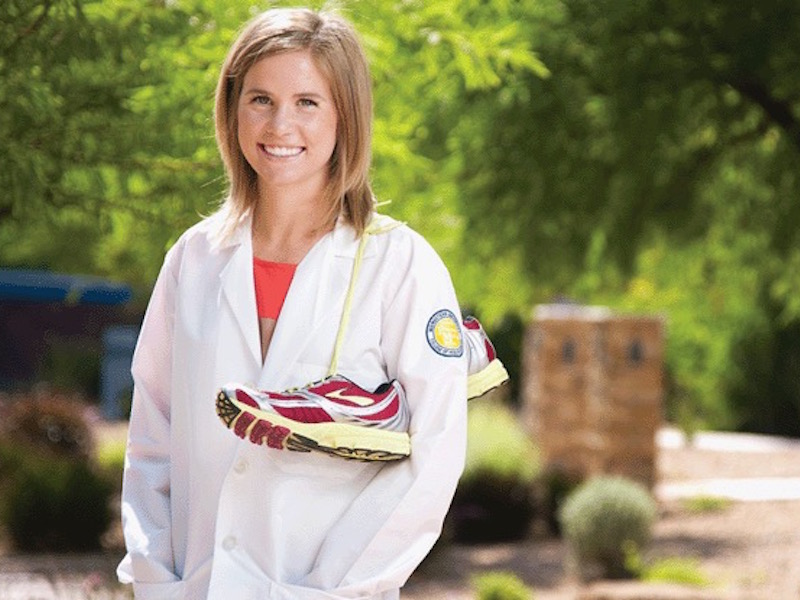