“ It is neat to see how all the pieces of Midwestern University come together to make the incredible production that is our educational process. ”

As a former Midwestern University employee, what inspired you to switch paths and pursue a healthcare career?

Medical school has remained my goal since I was 12 years old, but I guess I’ve been taking the scenic route. As an employee of Midwestern University, I thought I had the coolest job in the world. We dissected every species of domestic and exotic animal. The pathology we would see daily was wild! Eventually, I felt like I learned, built, and did as much as I could at the diagnostic lab. I felt it was time to continue my journey towards medical school, so I took the MCAT and started applying. I was hopeful to attend Midwestern because I already knew I liked the school and people here.

How did your background and history factor into your career choice?

I was 12 years old when my younger sister, Katie, was diagnosed with a Wilms’ tumor.  Katie was five years old. That horrible experience was the reason I wanted to become a physician. We lived in Thatcher, a small rural town in Arizona. My parents would drive Katie to Tucson for chemotherapy, radiation, surgery, and so forth. This was my first exposure to the major hospital setting, and I was fascinated, particularly with the physicians. They seemed so smart.  My parents had placed their trust in them to try and save my sister’s life, which I think also lead to a certain intrigue.

Any time the healthcare staff would do any procedures that I was able to observe, I was keen to watch. Sometime around then is when I decided I wanted to be like the doctors and nurses. I had no idea what that entailed, but I was 110% invested and would figure out the details later. I enrolled in a phlebotomy class at the local community college at 14 years old that required clinical practice hours at our small local hospital. Can you imagine the patients who met 14-year-old me coming with a needle and asking for blood? The hospital staff nicknamed me "Doogie Howser"; I had no idea what who that was, but I went along with it. Since drawing blood was the only thing I was allowed to do at that age, I became good at finding veins. That skill, and being kind, has opened numerous doors to me.

Growing up, nobody in my family was in healthcare, but now two of my three sisters are nurses and I’m in medical school. Once I graduate, I will be the first person in my family to get a doctorate. I would have been the first with a bachelor’s degree too, but my dad beat me by a few months.

How has being a staff member at Midwestern University affected your outlook as a student?

Having worked for Midwestern since 2015, I know how much work goes on in the background at the University that the students don’t see. The first few months of medical school blew my mind because I was seeing Midwestern from the student perspective for the first time. To use an analogy, it was like seeing a Broadway show from the audience for the first time after working backstage. It is neat to see how all the pieces of Midwestern (instructors, departments, staff, and so forth) come together to make the incredible production that is our educational process. Overall, it makes me profoundly grateful to the people at Midwestern who help make it all happen.

What about a Midwestern University education do you want to carry forward in your career?

My education at Midwestern really began back in 2015 as an employee. Over time, I learned how to be a better business professional and how to be a small piece of a bigger company and institution. There were a lot of people along the way who coached me and helped me succeed. So the thing I hope to carry forward in my career is the importance of kindness. I wish I could convey to all the students the principle of how important it is to be as kind and friendly to the janitor as they are to the president. Mr. Rogers had it correct when he said, “Look for the helpers. You will always find people who are helping.” 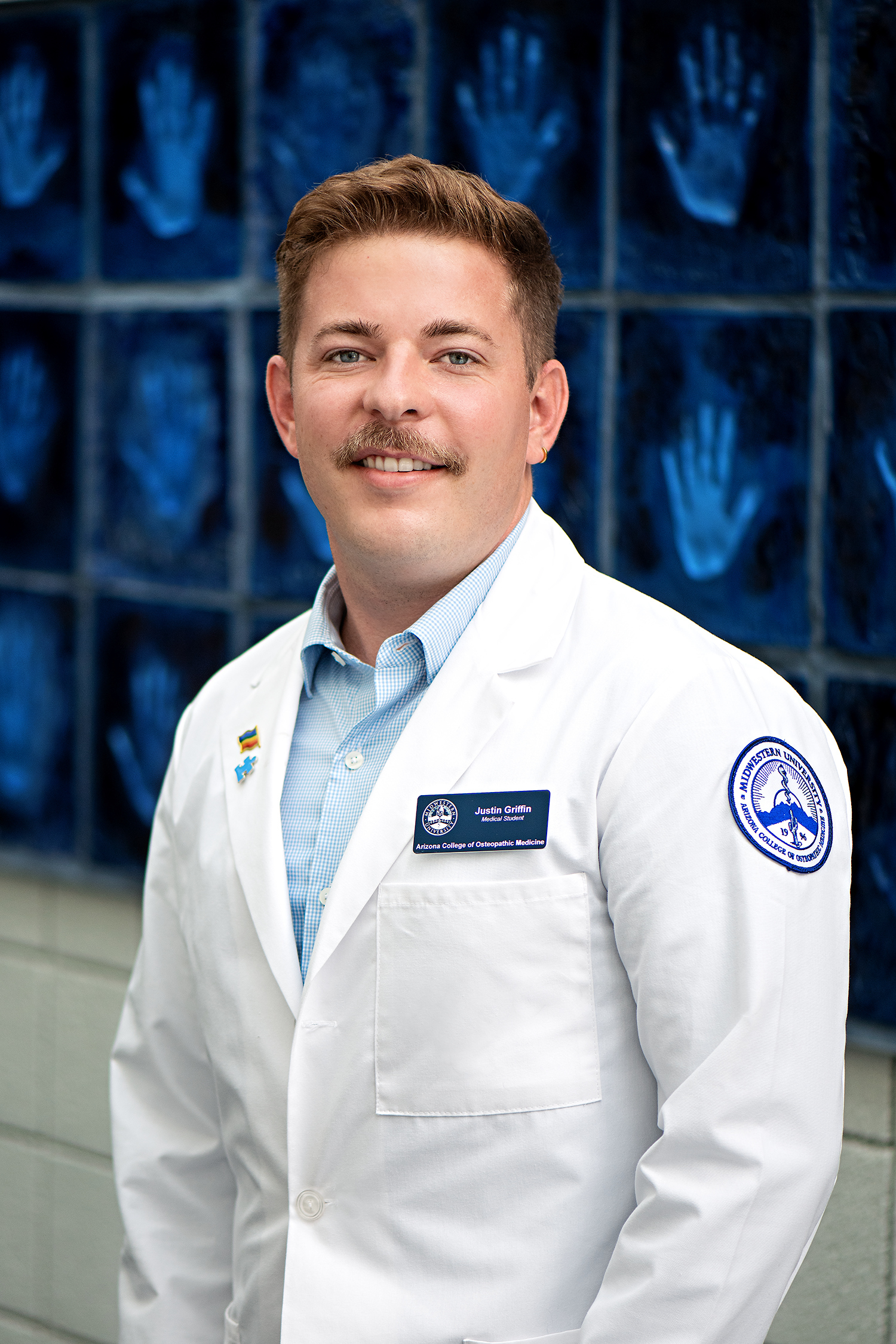 Justin Griffin is a Class of 2025 student at the Arizona College of Osteopathic Medicine in Glendale.