To celebrate his graduation from Midwestern University’s College of Dental Medicine-Illinois, Jose Vargas, D.M.D. (CDMI 2022) created a Facebook post about his inspirational journey from a young teenager from Mexico picking vegetables on a farm in the U.S. to earning his dental medicine degree.

In the post, Dr. Vargas outlined his struggles as a Deferred Action for Childhood Arrivals Program (DACA) student and how his determination and family support led him to achieve his goal of becoming a dentist. Dr. Vargas arrived in the U.S. with his parents and sister when he was 14 and started working twelve-hour shifts picking tomatoes, cucumbers, and bell peppers for less than minimum wage near his home in Moultrie, Georgia.

“ I am so grateful for Midwestern University, not only because they allowed me to apply and accepted me, but also for how Midwestern prepared me for a career in dental medicine. Going to Midwestern was the best decision that I could have made. ”

“I remember not being able to stand up straight after a full day’s harvest. I remember having to hide under a moving truck just to find shade from the 100-degree weather. I remember having my entire face covered in dirt and having to swat at flies just to be able to eat on my 15 min lunch break. I remember wanting out every single day and having to push through it anyway. But in the end, this IS my advantage and I wouldn’t trade it for the world,” Dr. Vargas wrote in the post.

Upon the encouragement of his mentors and teachers, Dr. Vargas made the post public, and it has since been shared and liked by thousands. He also has been interviewed by local and national television stations as well as other news outlets. “I thought that if in any way, shape, or form, I could inspire or motivate even one person that would be enough of a reason to make it public,” he said. “When I was starting out, I was looking to see if anyone else had succeeded coming from a similar background, and I could only find one example. But I’ve always thought that if you have even just a glimmer of hope, and are willing to work hard, you can achieve anything. My first job was working in the fields as a picker and being a dentist is going to be my last job.”

Dr. Vargas is now well on his way to a successful career with Dental Partners of Georgia and looks forward to improving the dental health of his patients. “I think the program at CDMI truly stands out. We had the latest technology, the opportunity to build our skills, and faculty who put the student’s education first. I feel well-prepared to start practicing dentistry,” he added.

However, Dr. Vargas faced several obstacles along the way and after completing his undergraduate education struggled to find a way forward.

“The road to becoming a Dentist has been a long and difficult one, full of dead ends and immense obstacles. The biggest one: simply being allowed to apply,” he wrote.

As he was researching graduate dental medicine programs, Dr. Vargas discovered that many schools would not accept an application from a student with DACA status. Despite the many roadblocks, he continued to contact schools, working his way north through the country. “I called Midwestern University and I was expecting a negative response yet again, but the person in the Admissions Office said they would be willing to review my application. I remember being so happy. It was the biggest amount of hope that I had received so far,” he said. “I am so grateful for Midwestern University, not only because they allowed me to apply and accepted me, but also for how Midwestern prepared me for a career in dental medicine. Going to Midwestern was the best decision that I could have made.”

Dr. Vargas says the lessons he learned as a youth working in the fields and the support of his family kept him motivated throughout the rigorous program at CDMI. “As hard as I was working in dental school, at the exact time my family was working just as hard back home. My parents were working two jobs, Monday through Sunday, just to be able to help support my schooling. It wasn't just one person who made this happen. It was a team effort.”

In May, Dr. Vargas’ parents and sister celebrated his accomplishment at the CDMI commencement ceremony on the Downers Grove Campus. “I'm the first in my family to graduate from a professional school and both my parents were crying at my graduation. They are very proud of me. But you should know that I contribute 100% of my success to my parents and the way I was raised.”

Dr. Vargas concluded his Facebook post with words of encouragement for anyone in a similar situation who is also looking for an example of what they can achieve:

To all of my underdogs out there who have come from very little, who maybe feel like you’re at a dead end or that you’re pursuing something far out of your league...keep your head up, grit your teeth, and show the world what you can do. Dreams do come true. A kid who has lived in a mobile home his entire life, the son of a lower-class working family, just finished a career in dental medicine and has earned the title of doctor…Nothing is impossible when you have heart, a little grain of hope, and a strong family supporting you…To my family, my friends, and to all of my DACA and undocumented brothers and sisters, WE did it! Si se pudo! 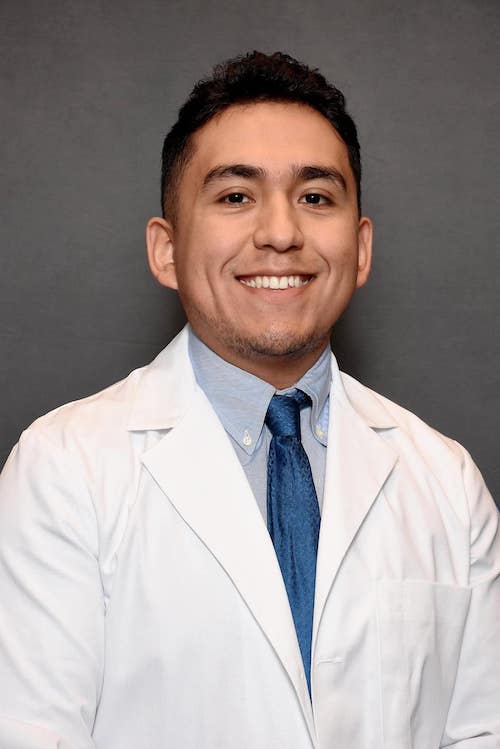 Jose Vargas is a Class of 2022 student from the College of Dental Medicine-Illinois in Downers Grove.