“ I get to study medicine being supported by the people who mean the most to them and I get to make them proud. ”

Tell us about your path towards medicine.

I am a first-generation Hispanic American and the oldest of three brothers. My mom immigrated to the United States from El Salvador and my dad immigrated from Guatemala, both hoping for a better life. I grew up balancing American culture while at school with my Central American roots when I came home. We were taught to be proud of being Hispanic and embrace the freedoms and opportunities that came with living in the United States.

My desire to go into medicine began in high school. I particularly enjoyed math and science and remember my mom saying, “You know, you should be a doctor,” especially since I had already told her I didn’t want to be president of the United States (which obviously devastated her dreams of being First Mom of this country. She still reminds me about it today!). At the same time, my favorite high school teacher, Barbara Scott, M.D., continually challenged me in her classes to learn as much as I could. I remember leading a class activity in her AP Biology class about bacteria and antibiotics. I had the class throw styrofoam balls at kidney cut outs in the middle of the class to show how bacteria can damage organs without treatment and how antibiotics get in the way and stop the effects of harmful organisms. (Maybe not completely medically accurate, but I was 16 at the time.) From that age, I felt the call to pursue medicine.

What made you choose Midwestern University?

I was admitted to AZCOM at Midwestern University on July 16, 2019. I will never forget being speechless as Dean Dr. Lori Kemper offered me admission, and that I had five days to get to Arizona for orientation. I had to interrupt her at one point to make sure she wasn’t joking because I couldn’t believe it. I cried the most hysterical, ugliest, and most joyful tears I have ever cried. I nearly gave my mom a heart attack when I told her about my admission. My dad was stunned and then was excited about the news. This phone call changed the trajectory of my life and my family’s.

That phone call meant that Dr. Kemper and the rest of the admissions committee believed in my abilities to be a physician. It validates the trepidation in pursing my graduate degree because of how expensive it was going to be. I worked two jobs while studying full time in graduate school, often in between patients, just to try to help pay for my education. I also get to be a U.S.-educated physician. Being born and raised in Los Angeles, I also get to go to school very close to my family. I get to be supported by my family and can visit home much easier during breaks. My family means a lot to me and knowing they are close is comforting.

Admission to AZCOM serves as validation for my parents. This is proof that their hard work, sacrifices, financial investments in my education, encouragement, and even immigration to the United States for a better life were all worth it. I get to study medicine being supported by the people who mean the most to them and I get to make them proud. It serves as an example for my family and community that it is possible to be a Hispanic medical student and future first-generation Hispanic physician. We deserve a seat at the table as well. This accomplishment, being admitted to medical school, is much more of a victory for them than for me, but I also hope that it serves as inspiration to the next generation of underrepresented minorities in medicine.

What are you most excited about going forward?

While I have always wanted to be a doctor, I am also doing this for my parents, younger brothers, and the Hispanic community. With only about 6% of all medical students in the United States identifying as Hispanic/Latino, I want to encourage other first-generation Hispanic students that careers in the health sciences, including being physicians, are possible and necessary to provide effective, culturally competent healthcare to communities who need it the most. With the growing rise in the Latino population, there is more of a demand than ever for doctors, especially those of Hispanic backgrounds. 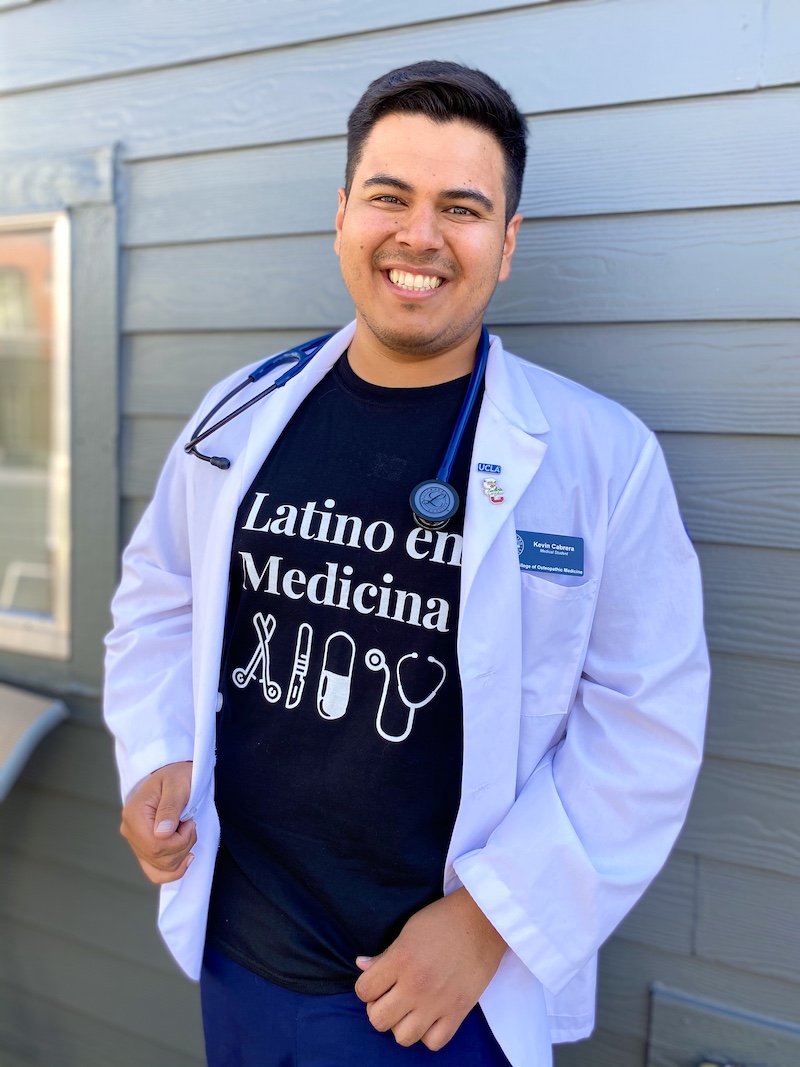 Kevin Cabrera is a Class of 2023 student from the Arizona College of Osteopathic Medicine in Glendale.