Academic, healthcare, business, and community leaders from around the Valley of the Sun joined together at Midwestern University on Saturday, October 13th at the annual Bright Lights, Shining Stars gala, which recognizes and honors community service and leadership. The event was held at the University's Glendale Campus at 19555 North 59th Avenue. 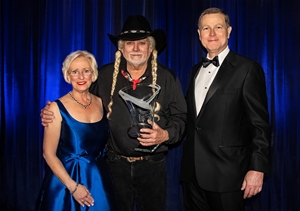 Mr. Tyler is an artist, sculptor, and horticulturist whose work has been commissioned and displayed all over the world. He graduated in 1972 from Arizona State University with a Master of Science degree in Environmental Horticulture. He then owned and operated a nursery for 15 years, after which he sold his business and became the Founding Director of the Arboretum at Arizona State University for six years. After deciding to pursue art on a full time basis, he has worked on over 100 projects, most of them large public art sculptures. Among his artworks on display at Midwestern University are a collection of decorative benches lining the campus' Reflecting Pool; an artistic ironworks sculpture representing the College of Veterinary Medicine's inaugural graduating class gift; and a symbolic iron sahuaro cactus in front of Sahuaro Hall.

Dr. Dana Devine has spent 45 years educating physicians, residents, interns, and student doctors and has taught Pathology at Midwestern University for over 20 years. Dr. Devine worked for over 40 years as a pathologist at various hospitals in the Phoenix metropolitan area, including John C. Lincoln Deer Valley and Mesa General Hospital Medical Center. She is also a past President of the Arizona Osteopathic Board of Examiners. Dr. Devine graduated with honors with a Bachelor of Arts degree from the University of Missouri, and received her Doctor of Osteopathic Medicine degree from the Kansas City University of Medicine and Biosciences College of Osteopathic Medicine. 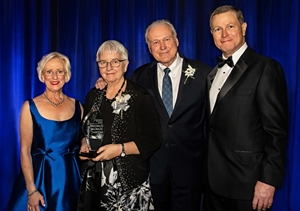 "I am so pleased to honor Mr. Tyler, whose wonderful work has enlivened our campus with its beauty; to pay tribute to the Devines for their extraordinary service as faculty at Midwestern University; and to recognize our student scholarship winners. On behalf of the entire Midwestern community, I would also like to thank everyone who joined us tonight for their generosity toward our students," said Dr. Goeppinger. 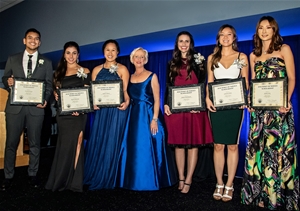 The annual black-tie-optional event, which raises scholarship funds for students in all of Midwestern University's colleges, also featured a formal dinner, live entertainment, and a silent auction.